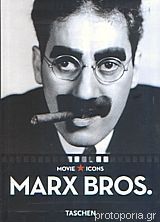 "The surprising thing about this film was that I succeeded in not going crazy," said director Leo McCarey about working with the manic Marx Brothers on Duck Soup. The madcap antics of Groucho, Chico, Harpo, and (sometimes) Zeppo have driven audiences wild with laughter in such unforgettable films as A Night at the Opera and A Day at the Races. Whether its wise-cracking Groucho with his big cigar and bushy eyebrows, street-smart Chico with his fake Italian accent, or skirt-chasing Harpo honking his horn, the Marx Brothers inimitable and irrepressible humor continues to inspire us today.