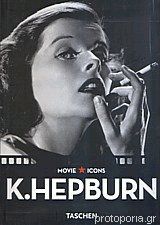 From birth, Katharine Hepburn seemed destined to become a symbol of the modern woman on stage, on screen, and in the world. Fiercely competitive, private, and independent, Hepburn was one part Olympic athlete Babe Didrikson, one part Amelia Earhart, and two parts Greta Garbo. Although often paired with the greatest actors in Hollywood—Humphrey Bogart (The African Queen); Cary Grant (Bringing Up Baby), James Stewart (The Philadelphia Story), and Spencer Tracy (Adam’s Rib, Woman of the Year)—Hepburn was able to carry her own films like Summertime, Little Women, and Sylvia Scarlett over a stage and screen career that spanned eight decades. Her home was never in Hollywood (where she won four Oscars) or New York but in Connecticut, where she died lamenting “I could have accomplished three times as much. I havent realized my full potential.”

The author: Alain Silver has co-written and co-edited a score of books including The Samurai Film, The Noir Style, The Vampire Film, Raymond Chandler’s Los Angeles, director studies of David Lean and Robert Aldrich, and four Film Noir Readers. His articles have appeared in numerous film journals, newspapers, and online magazines. He holds a Ph.D. from UCLA and is a member of the Writers Guild of America west and the Directors Guild of America.