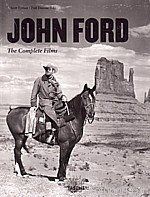 “When in doubt, make a Western.” —John Ford

Director of nearly 150 feature films and winner of six Oscars, John Ford (1895-1973) was the quintessential American filmmaker. Ford produced an unparalleled body of work that includes such classics as The Grapes of Wrath, How Green Was My Valley, Stagecoach, My Darling Clementine, The Quiet Man, and The Searchers. In response to critics and fans who praised his work as having a powerful, singular vision, Ford was known for making statements such as “Its no use talking to me about art, I make pictures to pay the rent"; though such assertions betrayed his genuine love of filmmaking, which he called “the only thing I really like to do.” Author Scott Eyman calls Ford “America’s Homer”—a fitting title for the filmmaker who helped frame the American experience for the world.

Scott Eyman, Books Editor of the Palm Beach Post, is the author of Ernst Lubitsch: Laughter in Paradise, The Speed of Sound: Hollywood and the Talkie Revolution 1926-1930 and Print the Legend: The Life and Times of John Ford, among others. He lives in Palm Beach, Florida.