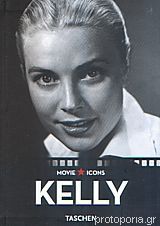 The top female box-office star of 1954, Grace Kellys status as icon takes in an 11-film, three-year, screen career and a glamorous later life as Princess of Monaco. More than any other star, she was in three memorable films the quintessential Hitchcock blonde, delineating traits of cool beauty, depths of hidden passion, intelligence, playfulness, and style—in short, the qualities that led biographer James Spada to call her “the pious mans Marilyn.” Yet Grace Kelly also showed her versatility and won her acting honors for playing against type in the title role in the grimly realistic movie The Country Girl. Grace Kelly was a classic beauty, a public figure, and serious actress representative of an era.