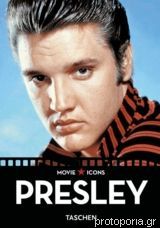 Elvis Presley would have been the first to laugh at the mad, godlike status he attained after death, but he would have surely identified with the human, gospel-haunted need such adoration rises out of. He shared that need, and courted it. He could sing and move with a spellbinding violence and grace. Yet his nature was also marked by a startling passivity—an eerily contented lack of ambition at his essence that kept him from growing after his first fiery years of success. That early fire still burns, nevertheless, and his mythical figure remains an omnipresent fixture today.