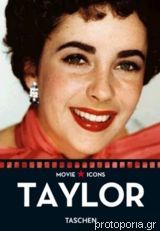 Elizabeth Taylor was a "diva" when that word still had meaning, before it was applied to every female celebrity with slightest bit of attitude and style. She was also one of the first actors to be raised to celebrity status by the media for the dramatic conflicts of her personal life as much as for any thespian achievements on the screen. In a time when studios controlled the news that was fed to the media about their valuable "properties," Taylor’s expansive personality and rollercoaster personal life was way too extravagant and exciting to be contained by the spin doctors of Hollywood.

James Ursini has co-written and co-edited eleven books with Alain Silver; Ursini and Silver are considered two of the foremost authorities on the subject of film noir. Among Ursini’s most notable works is the successful Film Noir Reader series. He has also contributed articles to various film magazines and has supplied the DVD commentary for numerous classic film noirs. He has a doctorate in motion pictures and has lectured on filmmaking at colleges in the Los Angeles area.