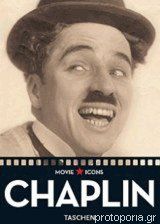 The unparalleled career of the Little Tramp

Charles Chaplin’s Little Tramp is the supreme icon of motion pictures—still recognized and loved throughout the world, more than 90 years since he first burst on the screen. The shabby little figure—with derby hat, too-tight jacket, oversized boots and pants, dandified bow tie, and swagger cane—seemed to symbolize the hopes and fears, defeats and optimism of all humanity. Chaplin’s own biography was a rags-to-riches story that saw the product of a destitute childhood in Victorian London become one of Hollywood’s first millionaires and the owner of his own studio before he was 30. His supreme gift was to transform his experience and knowledge of the human lot into comedy, for which his invention and skill have never been surpassed.

The author: David Robinson is a critic and historian of long experience. He was successively film critic for The Financial Times (London) and The Times (London). His books have included Buster Keaton, Hollywood in the Twenties, World Cinema, From Peepshow to Palace and the definitive Chaplin: His Life and Art. Robinson is currently director of the Giornate del Cinema Muto (the Pordenone International Film Festival), the most prestigious festival dedicated to film history, now in its 24th year.