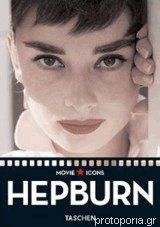 Her beauty has proved timeless—should we be surprised? Equally graceful whether moving or standing still, blessed with a balletic poise, luminous dark eyes, and an exquisite profile a queen might envy, Audrey Hepburn would no doubt have become famous in her youth even if the movies hadn’t found her—simply because no self-respecting camera could resist her. What sets her iconic beauty apart now, for us, more than a decade after she’s quit the stage of this life, is that her physicality is oddly secondary. Her extraordinary good looks merely halo a still-living smile.