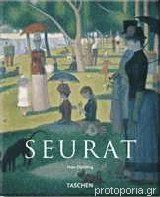 
Georges Seurat died in 1891, aged only 32, and yet in a career that lasted little more than a decade he revolutionised technique in painting, spearheaded a new movement, Neoimpressionism, and bought a degree of scientific rigour to his investigations of colour that would prove profoundly influential well into this century. As a student at the Ecole des Beaux-Arts, Seurat read Chevreuls 1839 book on the theory of colour and this, along with his own analysis of Delacroix paintings and the aesthetic observations of scientist Charles Henry, led him to formulate the concept of Divisionism. This was a method of painting around colour contrasts in which shade and tone are built up through dots of paint (pointillism) that emphasise the complex inter-relation of light and shadow.


Two paintings more than any others reflect his investigations in this area - 1884s "Bathers at Asnieres" and 1886s "A Sunday Afternoon at the Ile de La Grande Jatte". Their impact was immediate and enormous. Opposed to any popularisation of his theories, he only relented in 1890 and agreed to the publication of a summary volume. But by then he had just a year to live.

Hajo Duchting wrote a PhD on Robert Delaunays Window-pictures, and has concerned himself in many publications and lectures with modern painting and the history of colour and colour theory. TASCHEN has already published his "Cezanne", "Kandinsky" and "Delaunay".