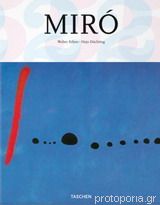 Fellow painter Walter Erben spent countless hours conversing with his colleague Joan Miro (1893-1983) at his house in Mallorca in preparation for this book. Over the course of these talks, Miro gave Erben many interesting and invaluable insights into his art, as well as his own interpretations of his most significant works.

Thus was born this Miro retrospective which explores, through texts and images, the life`s work of one of the 20th century`s most influential painters.

Hajo Duchting, a painter, writer, editor, and art historian, holds professorships in the history of modern art at the Universities of Leipzig and Munich. He has supplemented Erben’s text with a chapter on Miro’s later life as well as numerous interpretations of a selected number of works.

Walter Erben (1908-1981) studied German at Berlin University as well as painting at the Academy of Art in Dusseldorf, where he studied under Oskar Moll and Paul Klee. Erben taught fine art in Rome and Hagen, authored many successful books on the subject, and lectured extensively during his lifetime.