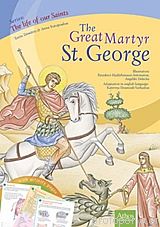 Our Saints are our greatest mentors. The example they have set for us can never lose its value with the passage of time. This is the subject of a new series entitled "The life of our Saints", which is published in Greek, English and Russian by Athos Children’s books.

The first book is dedicated to the holy, glorious Great-martyr St. George who lived in the late 3rd century. His name means "worker of the land". His father Gerontius was as an important official of the army who died as a Christian martyr. His mother raised him in piety. St George joined the army and proved to be a charismatic soldier. He was tationed in Nicomedia as the personal guard of the Roman Emperor Diocletian.

St. George is often depicted with a dragon and a princess. These depictions refer to the story according to which St. George faced the dragon and after invoking the name of the Holy Trinity, killed it and saved the princess. The grateful citizens then abandoned their ancestral paganism and converted to Christianity.
St.George was ordered to take part in the persecution of Christians, but instead He claimed himself to be a Christian, in the presence of his fellow soldiers. The Emperor ordered the strict punishment of St. George. After being tortured for long George was executed by decapitation on April 23, 303 AD. Empress Alexandra and Athanasius, a pagan priest, also became Christians, and so they joined George in martyrdom as a consequence.

The book includes the story of the Great Martyr, his troparion and activity pages for the children.