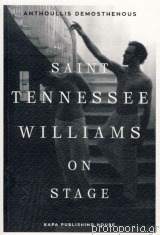 The aim of this booklet is to decode the allegories and symbols in the literary work of Tennessee Williams. There can be no doubt that Williams constructs an image of himself through his theatrical heroes and heroines. Val Xavier (Orpheus Descending), Lot (The Kingdom of Earth) and other Christ figure characters are just camouflaged projections of Williams life and times. The process of self sanctification involves his theatrical characters along with Christian hagiology and his own traumatic experiences. As a playwright he uses theatrical characters as a dramaturgical device and as a medium to expose his real self to his audience. In the context of this academic research, the author introduces a different artistic interpretation directing Williams words as religious dramas. "Sebastian and the cannibal" was an experimental performance based on liturgical and ceremonial customs. "The Angel in the Alcove" was a reflection of the earthly world as a Calvinistic nightmare. "Cabeza de Lobo" was an allegory of the theme of Holy Eucharist. The vast majority of the scholars consider Tennessee Williams an enemy of Christian Church and an immoral "pilgrim of flesh". Was his homosexuality his lifestyle? Not at all. His homosexuality was his martyrdom. His plays are coded sermons in which Williams declares his faith in Christian metaphysics.