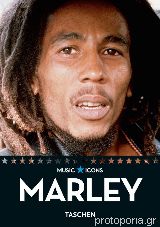 The life and music of the first reggae superstar

Few artists can lay claim to representing an entire music genre: singer-songwriter, guitarist Bob Marley is one. His name is synonymous with the indigenous Jamaican off-beat music of reggae, a local genre he took from his beloved island homeland to the world. The first reggae superstar, the dreadlocked, ganja-smoking Marley became a musical ambassador not only for the rhythmic Caribbean music, but also for themes of peace, revolution, poverty, spirituality, love, and the Rastafarian philosophy. With his life cruelly cut short by cancer at only 36, Marley’s entire recording career spanned only 19 years—during which time he created a canon of work which is more popular today than ever before. His greatest hits collection, Legend, is by far the best-selling reggae album of all time, while his 1977 opus, Exodus, was named Album Of The Century by Time magazine in 1999. Marley was posthumously inducted into the Rock and Roll Hall of Fame in 1994 and honoured with the Grammy Lifetime Achievement Award in 2001.

The Music Icons series:
Each title contains a painstaking selection of approximately 150 portraits, colorful posters and record covers, rare concert photos, and previously unpublished candid photos. These images—each matching an important biographical event—are accompanied by text tracing the progression of each subject’s life and career and are complemented by a section containing lists of essential recordings and selected chart rankings.