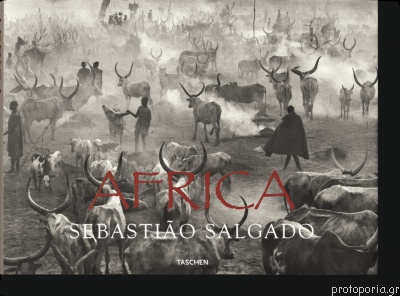 An homage to Africas people and wildlife

Sebastiao Salgado is one the most respected photojournalists working today, his reputation forged by decades of dedication and powerful black-and-white images of dispossessed and distressed people taken in places where most wouldn’t dare to go. Although he has photographed throughout South America and around the globe, his work most heavily concentrates on Africa, where he has shot more than 40 reportage works over a period of 30 years. From the Dinka tribes in Sudan and the Himba in Namibia to gorillas and volcanoes in the lakes region to displaced peoples throughout the continent, Salgado shows us all facets of African life today. Whether he’s documenting refugees or vast landscapes, Salgado knows exactly how to grab the essence of a moment so that when one sees his images one is involuntarily drawn into them. His images artfully teach us the disastrous effects of war, poverty, disease, and hostile climatic conditions.

This book brings together Salgado’s photos of Africa in three parts. The first concentrates on the southern part of the continent (Mozambique, Malawi, Angola, Zimbabwe, South Africa, Namibia), the second on the Great Lakes region (Congo, Rwanda, Burundi, Uganda, Tanzania, Kenya), and the third on the Sub-Saharan region (Burkina Faso, Mali, Sudan, Somalia, Chad, Mauritania, Senegal, Ethiopia). Texts are provided by renowned Mozambique novelist Mia Couto, who describes how today’s Africa reflects the effects of colonization as well as the consequences of economic, social, and environmental crises.

This stunning book is not only a sweeping document of Africa but an homage to the continent’s history, people, and natural phenomena.

Lelia Deluiz Wanick Salgado, born in Vitoria, Brazil, studied Architecture and Urban Planning in Paris. Her interest in photography started in the early 1970s and she moved on to conceiving and designing photography books and organizing exhibitions, among which were numerous books and exhibitions by Sebastiao Salgado. In 1994, Lelia Wanick Salgado and Sebastiao Salgado created Amazonas Images, a press agency in Paris handling only Salgado’s work. Lelia is the director of the agency.

Sebastiao Salgado was born in Aimores, state of Minas Gerais, Brazil. A former economist, Salgado began his career in Paris as a professional photographer in 1973 and subsequently worked with the photo agencies Sygma, Gamma, and Magnum Photos. In 1994, Lelia Wanick Salgado and Sebastiao Salgado created Amazonas images, an agency that handles exclusively his work. Salgado travels throughout the world for his photographic projects which have been featured in numerous international periodicals as well as books, including Other Americas (1986), Sahel: l’homme en detresse (1986), Workers (1993), Terra (1997), Migrations (2000), and The Children (2000). Exhibitions of these bodies of work tour internationally. Salgado has been awarded numerous major photographic prizes in recognition of his accomplishments and is a UNICEF Goodwill Ambassador. Together Lelia and Sebastiao have been working since 1991 on the restoration of a small part of the Brazilian Atlantic Rainforest, in the Rio Doce Valley, where they created Instituto Terra, a natural reserve and environmental educational center. Salgado’s current photographic project is Genesis, a series of black-and-white photographs of landscapes, wildlife, and human communities around the globe that represents a search for nature in its original state.

Translated in more than 20 languages, Mia Couto is Mozambique’s most celebrated author. His first novel, Sleepwalking Land, was chosen by an international jury as one of twelve best African books published in the 20th century. He lives in Maputo (Mozambique) and works as an ecologist.