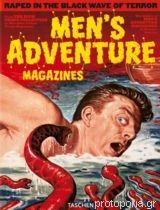 Battling dangerous beasts such as ferocious lions, venomous snakes, or swarms of man-eating weasels, the hunky heroes of mens adventure magazines were frequently depicted struggling to protect themselves and especially their buxom female companions from the gruesome tragic ends that threatened their every waking moment. Whether stranded on desert islands, clashing with motorcycle gangs, or shackled in prison camps, the magazines male and female protagonists were perpetually fighting their ways out of dangerous predicaments.

To pay homage to the American periodicals of the 1950s, 60s, and 70s that "documented" such outrageous exploits, TASCHEN brings you this hefty, comprehensive guide packed full of colorful cover art, sumptuous sample spreads, and enlightening essays. With an in-depth introductory essay describing the history, culture, and artistry of mens adventure—a.k.a. "sweat"—magazines, as well as chapter-by-chapter exploration of various subjects including the role of women and the portrayal of Communists, this definitive study of the genre examines not only the popular appeal of the magazines but also their social and political implications.

*Winner of the 2007 Anthony Award for Non-Fiction from the Bouchercon mysery convention!*

Max Allan Collins is a novelist and filmmaker fighting nature in Iowa (indoors). His novel Road to Purgatory is the sequel to his famed Road to Perdition, the basis of the motion picture starring Tom Hanks. He is also the author of the Nathan Heller novels, which have won him a Life Achievement Award from the Historical Mystery Appreciation Society.

For over 20 years, George Hagenauer has been Collins`s research associate, assisting on over two-dozen historical novels and collaborating with him on the Edgar Award-nominated The History of Mystery. His own freelance writing has been in the true crime field. He lives in Wisconsin.

Collector Rich Oberg saw his first men`s adventure magazine on a Piggly Wiggly grocery store magazine rack in 1968 and decided that maybe shopping with mom wasn`t so bad after all. He began collecting the magazines and the original art that graced their covers in 1982 and now maintains the largest known collection in the United States.