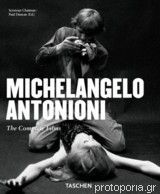 With L`Avventura he piqued the world`s curiosity. With La Notte and L`Eclisse, he mystified audiences and broke hearts. With Red Desert, his first color picture, he blurred all the lines between art, cinema, and still photography. Continuing his creative explosion with Blow-Up, Zabriskie Point, The Passenger, and The Identification of a Woman, Michelangelo Antonioni cemented his reputation as the most innovative and artistic filmmaker of his generation. With a plethora of illustrations, drawn in part from Antonioni`s own archives, this book explores his life and career from his earliest documentaries to his latest collaborations.

Seymour Chatman is Professor Emeritus of rhetoric and film studies at the University of California, Berkeley. He has widely published books and articles on on cinema, narratology, film adaptation, parody, and the theory of literature.