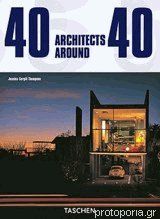 Who are the Norman Fosters, Richard Meiers, and Tadao Andos of tomorrow? Discover the next generation of designers who are already starting to shape the future of architecture for the new millennium, redefining the relationships between culture, environment, structure, and space. Taking their inspiration from visions of the future and traces of the past, these are the people who are defining the aesthetics of tomorrows architecture. Some of the architects featured, such as Shigeru Ban of Japan and Ben van Berkel from Holland, have already gained critical acclaim for their work. The rest, such as Marc Barani and Aranda Pigem Vilalta, are waiting in the wings.

This 25th anniversary edition is a special edition of 40 under 40!

The author: Jessica Cargill Thompson completed her studies at Durham University, England, in 1989. Since then, she has worked as a freelance journalist and writer for architectural magazines such as Building Design, Building, Wallpaper*, Time Out, Space, FX, and the RIBA Journal. In 1995 she was honoured as International Building Press’s Journalist of the Year, and in 1996 she was shortlisted as their Architectural Writer of the Year.