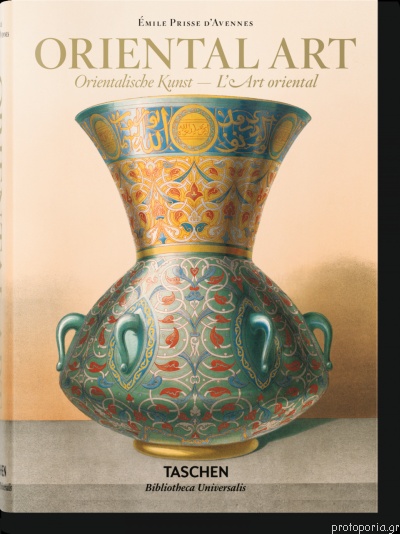 Emile Prisse d’Avennes (1807–1879), a French Orientalist, author, and artist, was one of the greatest pre-20th-century Egyptologists. As a youth he dreamed of exploring the Orient and at 19 began traveling to Greece, India, and Palestine. Over the next 40 years he explored Syria, Arabia, Persia, and also spent long periods living in Egypt and Algeria. Having converted to Islam, he traveled under the Arabic name Idris Effendi.

With a keen eye for the symmetry, opulence, and complexity of local visual cultures, Prisse d’Avennes recorded the art and architecture which he encountered on his travels. His work would later become one of the most outstanding surveys on Islamic art and architecture, with Arab Art (L’Art arabe d’apres les monuments du Kaire) being published between 1869 and 1877 in Paris.

This TASCHEN edition revives Prisse d’Avennes’s magisterial chromolithograph survey in all its attention to detail, as well as to historical, social, and religious contexts. For further situational understanding, it includes his supplementary studies of the people and costumes of the Nile Valley, which he published in the Oriental Album (Oriental Album: Characters, Costumes, and Modes of Life, the Valley of the Nile, London, 1848). It is a precious record not only of Arabic, Persian, and Ottoman heritage but also of the history of thought and imagination between Europe and the Middle East.