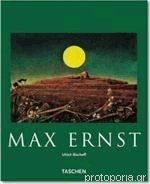 
Max Ernst (1891-1996) is one of the most important figures of Dadaism and Surrealism. As a student in Bonn, he found himself drawn to the Dada movement that had arisen in counter-reaction to the mass slaughter of World War I. The closing of the famed Dada exhibit in Cologne for obscenity led Ernst to decide to spend the rest of his life in Paris, where he came in contact with the Surrealists. Above all, Ernst stands out for his varied style and technique, having produced an oeuvre that reaches from paintings, drawings and sculpture, across texts and stage settings to collage-novels and the development of his own frottage technique. During the World War II, Ernst, like many of his colleagues, became an undesirable foreigner and was forced to emigrate; after the war, however, he returned to his adopted homeland. In 1954 he received the Grand Prize for Painting at the Biennial in Venice and during the 1960s his work was honoured with major retrospectives.

Ulrich Bischoff (born 1947) studied art history, German, sociology, history, philosophy, religion and education in Tubingen and Berlin. Since 1972 he has taught numerous courses at the Academy of Fine Arts in Munich and at the Universities of Berlin, Kiel, Hamburg, Passau and Dresden. In 1977/1978 Bischoff was academic assistant in Continuing Education at the Prussian State Museums of Culture, and between 1979 and 1989, he was a scholarly expert at the Art Hall of Kiel. Subsequently, he had responsibility for 20th-century art in the Bavarian State Painting Collection within the State Gallery of Modern Art in Munich. Since 1994, Bischoff has been director of the Painting Gallery of Modern Masters of the State Art Collection in Dresden. He has published numerous writings in the areas of classical modernity and contemporary art.