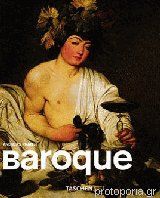 Let there be light

The Baroque period in painting and sculpture, stretching from the late 16th century to the early 18th century and occurring between the Mannerist and Rococo movements, was marked by richness, drama, and grandeur. Stylistically complex yet intensely engaging, Baroque art commonly combined dramatic lighting effects and theatrical compositions with great movement and energy. Caravaggio, Annibale Carracci, Rembrandt, and Rubens are among the artists most commonly associated with the Baroque movement.

each book includes a detailed introduction with approximately 35 photographs, plus a timeline of the most important events (political, cultural, scientific, etc.) that took place during the time period. The body of the book contains a selection of the most important works of the epoch; each is presented on a 2-page spread with a full-page image and, on the facing page, a description/interpretation of the work, a reference work, portrait of the artist, quotes, and biographical information.