The World of Ornament 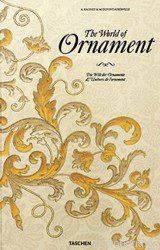 The most beautiful patterns in all of history

Imagine having an opulent compilation of historys most elegant and beautiful patterns and designs at your fingertips - to use, peruse, admire, and be inspired by. World of Ornament brings together the two greatest encyclopedic collections of ornament from the 19th century chromo-lithographic tradition: Auguste Racinets LOrnement polychrome Volumes I and II (1875/1888) and M. Dupont-Aubervilles LOrnement des tissus (1877). Adapted from historical items dating back to antiquity, such as jewelry, tiles, stained glass, illuminated manuscripts, textiles, and ceramics, these ornamental designs encompass a wide range of cultural aesthetics including classic Egyptian, Greek, Roman, and Etruscan motifs, Asian and middle-Eastern patterns, as well as European designs from medieval times through the 19th century.

Artists, historians, and art lovers will appreciate this lavish idea book, and interior designers and patternmakers will be delighted that all of the ornamental designs may be used and reproduced without restriction!

The author: David Batterham has been an antiquarian bookseller in London since 1965. He specializes in books and journals on the graphic arts, ornament, fashion, and caricature with an emphasis on work from France and Spain.