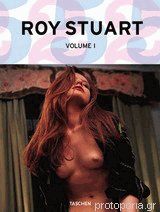 Stuarts photos and glimpse videos have aquired cult status even amongst experienced hardcore fans, and with good reason, for they represent an exquisite representation of the forbidden. In turns voyeuristic, in turns narrative, his pictures with their disarming explicitness subvert traditional moral codes and force the viewer to reevaluate his or her preconceived notions of sexuality. The photographs assembled in this book, which in another context might have been condemned, instead give a fascinating glimpse behind the scenes of Roy Stuarts magical theatre of transgression and taboo.

"Stuarts style and candor make voyeurism as respectable as youd ever want it to be."