The contribution of art and artists to architecture
Έκπτωση
30% 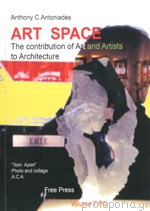 If Artists are not among the most creative people among us, then who are? This book explores the effect their personal spaces had in their creativity. It is the study of Space where Art was born, and it is a study of Space seen through the lense of Artists. Central Theme of focus is the space where Artists lived and worked, and through this the preferences and attitudes Artists developed toward Space. How they collaborated, communicated and cross-fertilized with Architects throughout the Art and Architectural movements in history up to the first fifteen years of the 21st century it is a book, result of many years of original research and visits to houses and studios of renowned Artists, exploring their lifelong struggles, which occasionally took metaphysical and postmortem dimensions. Yet, despite the reasons of the motivation for such museums, the space which had acted as a cradle of Art and creativity during the artists life, became an agent for immortality after death. Thus, "Art Space" is expressive of function of life, death and after death into one. [...]
Συγγραφέας:
Αντωνιάδης, Αντώνης
Εκδότης:
Ελεύθερος Τύπος
Σελίδες:
330
ISBN:
9780002852968
Ημερομηνία Έκδοσης:
1/9/2014