From the Exhibits of the Archaeological Museum
Έκπτωση
10% 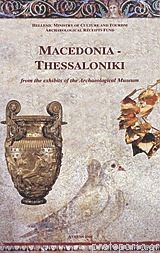 3. The Historical Period in Macedonia (7th C. Bc-4th C. Ad)
- Geographical and historical framework
- The rise and fall of the Kingdom of Macedonia
- Roman rule in Macedonia (168 BC-4th c. AD)
- Dating Macedonian inscriptions
- Population, society, and institutions
- The weaponry of the Macedonian army
- Education
- Rural life
- Workshops
- Travel and trade
- Private life and the household
- Beliefs about the afterlife
- Cults and myths
- Arts and letters

4. Thessaloniki
The Historical Context: The settlements around the Thermaic Gulf before the founding of Thessaloniki, The founding of Thessaloniki, Thessaloniki under Roman rule, The period of the Tetrarchy
- Private and public life
- The cemeteries
Monumental Building Complexes: The archaeological site in Kyprion Agoniston Square, The Hellenistic baths in the later Roman Imperial agora (forum), The agora during the Imperial age, The "Incantadas", The Galerian palace complex
- Festivals, spectacles and their venues
- Cults
- The Sanctuary of the Egyptian Gods
- The Ionic temple transported to Thessaloniki