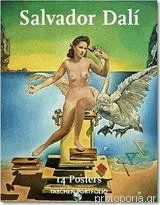 The fantasies and symbols of Salvador Dalis Surrealist visions

"Every morning when I awake," said the painter of Soft Watches (later retitled The Persistence of Memory), "the greatest of joys is mine: that of being Salvador Dali..."

The native Catalonian Dali was obsessed with both money and fame; painting and speaking were his main occupations, his favourite subject - how to discover ones genius. Not exactly loved by the Surrealists, who criticised him for extravagance and his addiction to money (it was Andre Breton who came up with the anagramm "Avida Dollars"), Dalis paranoiac-critical method nonetheless provided them with a first-rate instrument to liberate intelligence and imagination from the bonds of memory and dreams.

Had he been born during the Renaissance, his genius would have met with greater acceptance than was the case in our era, which saw him as a constant source of provocation; he, for his part, described the era as degenerate. Dali commented: "The only difference between me and a madman is the fact that I am not mad", remarking pithily that "The difference between me and the Surrealists is that I am a Surrealist."

Dali decodes the fantasies and symbols of his Surrealist visions, penetrating the depths of the irrational and subconscious, elevating hard and soft to the level of aesthetic principles. He and Gala, his wife and muse, are mythical couple, she his "existential double", his "perpetuation in immortal memory". At the age of three, Dali had wanted to become a cook, aged five Napoleon. Thereafter, he continually aspired to something higher - to be divine Dali forever...
The Dali portfolio features high quality prints that beg to be framed. Tucked in the portfolio are 14 large-format reproductions, each with a brief description.

Fried Eggs on the Plate without the Plate, 1932

Apparition of the Visage of Aphrodite of Cnidos in a Landscape, 1981

The Temptation of Saint Anthony, 1946

Design for the set of the ballet "Tristan and Isolde", 1944

Dream Caused by the Flight of a Bee around a Pomegranate a Second before Awakening, 1944

The Disintegration of the Persistence of Memory, 1952-1954