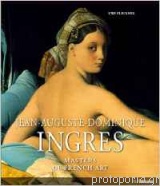 Jean-Auguste-Dominique Ingres (1780–1867) was a French Neoclassical painter. Although he considered himself to be a painter of history in the tradition of Nicolas Poussin and Jacques-Louis David, by the end of his life it was Ingress portraits, both painted and drawn, that were recognized as his greatest legacy. A man profoundly respectful of the past, he assumed the role of a guardian of academic orthodoxy against the ascendant Romantic style represented by his nemesis Eugene Delacroix. In this volume, numerous large-sized illustrations showcase the artist’s oeuvre; authoritative texts illustrate the decisive stages in the artist’s life and in the development of his work, explaining their significance in the context of his time and for the following generations of artists.
Εκδότης:
Ullmann H.F.
Σελίδες:
140
ISBN:
9783848005567
Ημερομηνία Έκδοσης:
1/1/2013