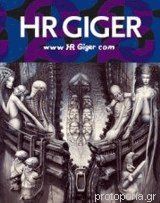 HR Giger first received acclaim in the 1960s with his airbrushed fantasy landscapes. However, he scored his breakthrough in applied art, and particularly in his high-profile movie work on Ridley Scotts Alien. In 1980, he received an Oscar for "Best Achievement for Visual Effects" for his designs of the films title creature and its otherworldly environment.

His other celebrated film projects include Poltergeist II, Alien 3 and Species, for which he designed a deadly but beautiful half-extraterrestrial female creature and a fantastic nightmare train. Gigers album covers for Debbie Harry and Emerson, Lake and Palmer were voted as being among the top hundred in music history by music journalists, while furniture designed by Giger graces a bar in Chur, Switzerland.

This book was designed by the artist himself, and features detailed commentaries in which Giger describes his work from the early 1960s to the late 1990s; the authentic voice of the master.

“Like Hieronymus Bosch, like Pieter Bruegel, Giger mercilessly shows us the anabolism and catabolism of our realities."