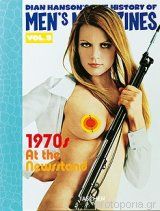 Open your notebooks, sharpen your pencils, and get ready for a history lesson like none you’ve ever experienced. You’re about to learn everything you could ever want to know about the world history of men’s magazines—not magazines about sports, not fashion, not hunting or fishing or how to build a birdhouse in ten easy steps, but those titillating periodicals embracing the subject dearest to all heterosexual men’s hearts and other body parts: the undraped female form. Former men’s magazine editor Dian Hanson traces its development from 1900 to 1980 in six massive and informative volumes.

As Volumes 3 and 4 covered different aspects of the 1960s, Volumes 5 and 6 showcase the two sides of 1970s mens magazines. In Volume 5 we explore newsstand magazines gathered from around the world. See the effects of the Sexual Revolution in Germany, England, France, North and South America, Japan, Hong Kong, and Italy. Read profiles of Hustler publisher Larry Flynt and Screws Al Goldstein, and of lesser known, but no less fascinating characters like Peter Wolff, hippie genius of the True Sex genre, and gun-toting Myron Fass, last of the pulp-pushers. See the evolutionary end-stage of sex humor magazines, the overflowing abundance of big breast titles, the emergence of swinging as lifestyle and publishing niche, the curious phenomenon of reader-written erotica, more funny, amazing and confounding ads from the magazines back pages and cap it all with the 70s top five covergirls (and one coverboy).

Volume 5: 1970s At the Newsstand contains 460 full color pages of covers and magazine interiors and 18 chapters of information-rich text. Together with Volume 6 it forms a complete overview of men’s magazine publishing of the 1970s. With Volumes 1 through 4, these two books complete the six-volume set of Dian Hanson’s: The History of Men’s Magazines.

Dian Hanson is a twenty-five-year veteran of men’s magazine publishing. She began her career at Puritan Magazine in 1976 and went on to edit a variety of titles, including Partner, Oui, Hooker, Outlaw Biker, and Juggs magazines. In 1987 she took over the ‘60s title Leg Show and transformed it into the world’s best-selling fetish publication. Most recently, she authored TASCHEN’s Terryworld, Tom of Finland: The Comic Collection and Dian Hanson’s: The History of Men’s Magazines six-volume set.