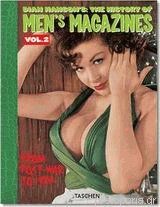 Open your notebooks, sharpen your pencils, and get ready for a history lesson like none you’ve ever experienced. Yes, that’s right: you’re about to learn everything you could ever want to know about the world history of men’s magazines—not sports, not fashion, not hunting or fishing or how to build a birdhouse in ten easy steps, but those titillating periodicals embracing the subject dearest to all heterosexual men’s hearts and other organs: the undraped female form. A twenty-five-year veteran of the genre, former men’s magazine editor Dian Hanson traces its development from 1900 to 1980 in six massive and informative volumes.

Volume I explores the period from 1900, when sexy magazines first started to appear in France and Germany, through the decades of subterfuge and censorship up to the great global change wrought by WWII. Along the way the USA, England, Argentina, and many other countries join the publishing fun. Volume II starts in the post-war period of the 1940s when the US surged ahead in magazine production while the rest of the world rebuilt and recovered, and ends in 1957 when censorship at last began to ease.

Volumes III and IV cover the short but crucial transformation period of 1958 to 1967: ten years in which the world and its men’s magazines changed out of all recognition to anything that had came before. Volume III begins with the redefinition of American obscenity laws and follows the flowering of mass distribution, or newsstand, men’s magazines around the world. Volume IV traces the roots of “special interest” and under-the-counter publications during this same period, ending with the Scandinavian sexual/social revolution that resulted in the repeal of all obscenity laws for most of Northern Europe.
Finally, in Volumes V and VI you’ll find the years 1968 to 1980: the post-sexual revolution era of sudden publishing freedom. Volume V covers the newsstands of the world, showing everything from homemade hippie ‘zines to periodicals for big bottom fanciers. Volume VI, the final word in this encyclopedic series, is reserved for the most daring and extreme edges of the publishing field. Here you’ll peek inside the adult bookstores of Denmark, Sweden, Germany, the US and Japan to see what sexual freedom really meant.

Each volume contains over 400 pages and 15 to 20 chapters, profiling important or quirky publishers and their magazines, single countries in a given era, distinctive genres such as swinging (“Suburban Sin”) or spanking (“Spank You Very Much!”), top models, and those back-of-the-magazine advertisements for male girdles and X-ray spectacles. Most importantly: while the books are amply supplied with fascinating and educational text, they are also chock full of magazine covers and photos—a whopping 5000 images in all! Who knew learning could be so much fun?

The author:
Dian Hanson is a twenty-five-year veteran of men’s magazine publishing. She began her career at Puritan Magazine in 1976 and went on to edit a variety of titles, including Partner, Oui, Hooker, Outlaw Biker, and Juggs magazines. In 1987 she took over the ‘60s title Leg Show and transformed it into the world’s best-selling fetish publication. Most recently, she authored TASCHEN’s Roy Stuart: The Fourth Body.