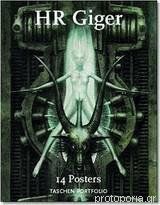 One of the worlds foremost artists of Fantastic Realism

H. R. Giger is recognized as one of the worlds foremost artists of Fantastic Realism. Born in 1940 in Chur, Switzerland, he studied architecture and industrial design at the School of Applied Arts in Zurich. By 1964 he was producing his first artworks, mostly ink drawings and oils, leading to his first solo exhibition in 1966, followed by the world-wide distribution of his first published posters in 1969. Shortly after, he discovered the airbrush and his own signature, freehand, style, and created his most well known works, the cwhich formed the cornerstone of his fame.

Gigers first book, Necronomicon, published in 1977, served as the visual inspiration for director Ridley Scotts blockbuster movie Alien, Gigers first film assignment, earning him the 1980 Oscar for "Best Achievement in Visual Effects", for his designs of the films title character and its otherworldly environment. Gigers album covers for Debbie Harry and the band ELP were voted among the 100 best in music history in a survey of rock journalists.

Throughout his career, Giger also worked in sculpture and, in 1992, created his first total environment, the Giger Bar in Chur. The Museum H.R. Giger in Chateau Saint-Germain was opened in Gruyeres in 1998. Today, Giger continues to live and work in Zurich with his companion in life Carmen, where his current projects include the realization of his museum bar in Gruyeres.

The H.R. Giger portfolio features high quality prints that beg to be framed. Tucked in the portfolio are 14 large-format reproductions, each with a brief description.